“A dial tone across continents as memorial, a pure silky idea stained in want and red,” reads my simply typed menu. Kimono Telephone is the title of the second course in Chelsea Turowsky’s ‘Dream Food’ dinner, and this short line is a dark memory from the poet-cum-chef’s vivid imagination, from which the menu is inspired. The food arrives, served on a slim red plexiglass slate; dark, cheap, and sexy. Turowsky’s ingredients are simply listed on the menu but are cooked with expert precision and deftness of touch. The rice paper noodles are perfect, imbued with squid ink and paired with just the right amount of chili heat, tamari, and sesame. The roasted pink radish sits fatly atop the noodles, requisitely lifting the dish with their fresh, crisp texture. If this is dream food, I want to be asleep.

“Dreams are memories and emotions re-imagined and reinterpreted, so when I create a menu, I think of how I might represent them symbolically through every aspect of food; the taste, texture, colour, and scent,” Turowsky explains, “A dream is very similar to me to a plate where elements can interact with one another in surrealist ways.”

Turowsky is visiting Berlin from her Californian home, having flown over specifically to participate in a culinary residency programme created and facilitated by Bonbock, a Berlin-based platform founded by German-Canadian Mark Andre Pennock. The Dream Food pop-up event is the culmination of Turowsky’s two weeks in Berlin, having spent her time here with Pennock visiting markets and meeting other chefs, artists, and industry professionals. “Mark is like the mayor of Berlin,” Turowsky confides, “it’s impossible to walk down the street without bumping into someone interesting he knows. I’m in awe of his network and passion for the city. He’s the perfect host.”

Earlier in the week I was invited to breakfast at the residency flat in Friedrichshain, a typically bright Berlin space with gorgeous old wooden floorboards, huge windows flung open to the spring sunshine, and, rather quirkily, a perfectly usable bathtub tucked under the kitchen sink. Turowsky greets me smiling, “I am so at home here already, it feels like my place, not Mark’s,” she beams and shows me a few of the items she’s picked up at local flea markets to enhance her dinner table at the Dream Food event.

As Turowsky busies herself with breakfast preparations, I chat to Pennock on the balcony about Bonbock’s past residencies and his plans for the future. Coming from an artistic background, and with over 15 years of experience in the culinary and art scenes in both Berlin and his native Toronto, Pennock brought his love of food and art together in Bonbock. The first incarnation of the platform created thematic, concept-based dinners in collaboration with the likes of Contemporary Food Lab, Agora Collective, Kuba Paris Marts Magazin, Food Art Week, and Infarm. Culinary talents such as Simon Schneeburger, Sarah Britton, Alex Petrican, and Felix Bröckner have been hosted by the platform, exploring the convergence point between art, food, and experience.

“One thing that has always drawn me to art is that it’s a discussion. When you view or make art, you absorb what you experience, get inspired and create something new. The food world is now very much a part of that conversation,” Pennock enthuses. He sees Berlin as an exciting place to be, not just because of its multiple histories, art, nightlife, and culture, but now, increasingly, because of its food scene. “The dynamic of Berlin has shifted in recent years. The food scene is burgeoning because of the patchwork of culture created by the influx of immigrants, from young western creatives to Syrian refugees.” Pennock continues, “There is a freedom here that you don’t get elsewhere; room for experimentation and exploration without massive financial risk.”

Pennock has big plans for Bonbock, and it seems Turowsky contacted him at a pivotal point in its trajectory, as it transitions into a more open-style residency where visitors can come and explore Berlin with a food-oriented perspective. “Since Chelsea applied, I’ve had all kinds of requests, including interest in urban farming, butchery, fermentation, bread-making, and communal dinners. With our extensive network, we can facilitate it all.”

The platform itself is not limited to Berlin, and Pennock is excited to reveal that Bonbock is going global, with plans to open several international residencies. “I want food enthusiasts to be able to dive into the food culture of any given city, just as Chelsea has done in Berlin, by accessing the key people in the industry immediately on arrival and open[ing] up food culture all over the world.” Pennock explains, “Travel is intrinsic to Bonbock’s future: considering how easy it is now to traverse the world, we want to facilitate an international community of food-centric exchange.” Although based in Berlin, Pennock will have a team of carefully selected, expert foodie “fixers” on the ground in each chosen city, who, with his help, can put together a tailored programme based on the individual requirements of the guest and offer direct access to all aspects of the culinary world through their network of industry professionals.

“In the next few years we hope to start residencies in Lisbon, Toronto, and maybe Barcelona and Venice, as these are places I already know well and have created food maps for. The dream is then to jump to somewhere like Bangkok and Copenhagen, and then—who knows!”

Breakfast is ready, and we sit down to a colourful selection of plates, including eggs, sunny side up, decorated with micro-greens and fresh cornflowers, and a white chia pudding with homemade fig jam and a rhubarb basil elderberry compote. Everything is fresh and delicious. There is clearly a good rapport and mutual respect between Turowsky and Pennock, as we eat and chat about their aims during the residency. “Knowing that my practice falls between the realms of food and art, Mark created experiences and initiated conversations that were specific to my field, thoroughly inspiring me,” Turowsky explains. Her conceptual practice grew out of her artistic catering company and health-forward meal delivery service in San Francisco, OMIOMI. The term “Omi” refers to Turowsky’s German grandmother who emigrated to the United States in the 1950s and is a large part of the reason for her being drawn back over here. Raised in New York, the chef lived briefly in Hong Kong and Spain and has travelled extensively throughout Southeast Asia. Each of these places have had a profound effect on her work. She says, “To travel and understand the culture and food of other countries is essential to my practice; food is where people come from, it’s depictive of how we interact with one another and ourselves and how we live.”

As the pop-up dinner was to be the main event of Turowsky’s stay, Pennock recommended various locations across the city, and they finally decided on the minimalist gallery space at Broken Dimanche Press in Neukölln for the dinner location. The avant-garde literary connection and pared-back simplicity of the space fits perfectly with Turowsky’s aesthetic. As I look around the room during the dinner, I can’t help but be impressed by the very real connecting power of food and eating communally with complete strangers from various countries and differing backgrounds. This feels like a coming together, a celebration not just of food, but of new experiences, new opportunities, and the boundless possibility of newly-forged relationships.

As the meal comes to an end, guests mill around, chatting, discussing, and exchanging details. I speak with Margaux Schwab, a Swiss-Mexican who is the founder of a cultural event called ‘Food Culture Days’ in Switzerland, a non-profit event focussed on exchange of knowledge, multi-disciplinary encounters, and food as an actor for change. I ask her why she came to the event, “I’ve been following the work of Mark and Bonbock for a while, as his events are always beautiful,” she tells me, “and Chelsea is an urban angel! Her food, like her, is delicate, like silk on skin.”

The mood in the room is one of enthusiastic content: It’s clear that Dream Food has been a triumphant conclusion to the residency. Pennock gives Turowsky a congratulatory hug; “I can’t have imagined a more perfect person to have hosted for the first of our open residencies. There were many areas where we were so naturally aligned; planning and discussing like old friends. I’m enthused by the myriad possibilities in Bonbock’s future.”

I’m already looking forward to hearing about the next nomadic chef/artist who passes through the Bonbock residency, be it in Berlin or worldwide; whatever happens, you can bet it won’t be ordinary. 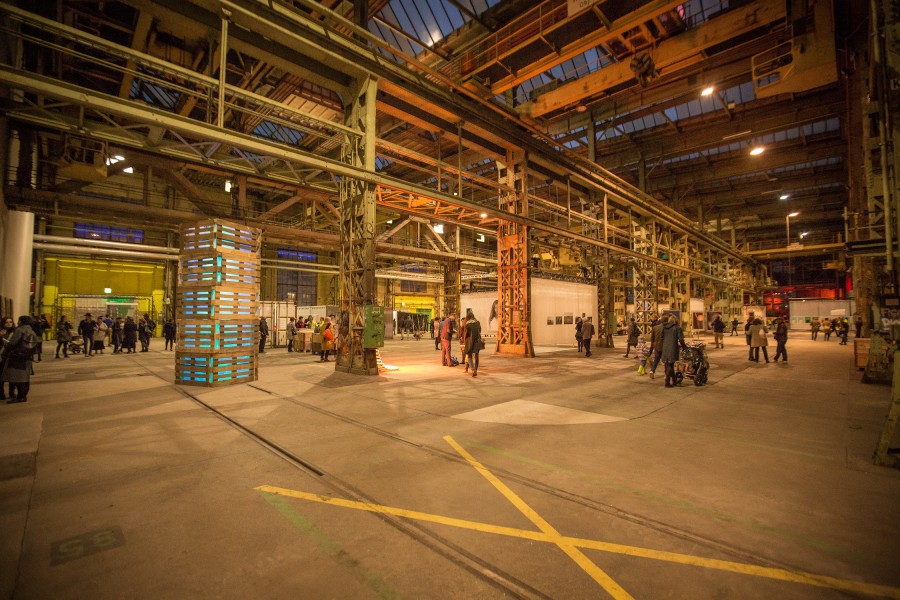