At first glance, the works of Julian Charrière remind me of the dreamscapes of my own travel fantasies – relaxing on tropical islands, going on adventures to exotic places or admiring natural wonders. However, Charrière’s hazy and often dreamlike facades are illusions for something much more foreboding.

Born in 1987 in Morges on Lake Geneva, Julian Charrière is a French-Swiss artist based in Berlin, whose artistic practice is rooted in the act of travelling the globe to investigate phenomena stemming from the Anthropocene. While studying at the Universität der Künste in Berlin within Olafur Eliasson’s Institut für Raumexperimente (Institute for Spatial Experiments), he learned to be freely interdisciplinary within many different fields in science and humanities. As a result he creates works that are not restricted by a specific medium or format and that bridge the realms of environmental science and cultural history. This bridge also determines the choice of destinations he travels to: “I'm fascinated by places where one can sense a friction between ourselves and the environment and that leave a symptomatic scar of our passage here, like a witness of our civilisation.”

Perhaps no other image embodies this friction better than that of human’s responsibility for the melting ice glaciers and its severe repercussions. In 2013, Charrière travelled to Iceland and translated this issue quite literally into an artistic intervention, climbing an iceberg in the Arctic Ocean and melting the ice with a gas torch for 8 hours. The resulting images entitled The Blue Fossil Entropic Stories shows the absurdity of mankind’s behaviour. For Charrière, “(…) it is really important that there is a fragile silhouette, the image of a man melting the ice beneath his feet. The person in the picture acts as a catalyst, as a projection surface, which invites every spectator to imagine themselves as the protagonist.” And although the depicted scenery of arresting beauty can be compared to the romantic painting Wanderer Above the Sea of Fog (1817-18) by Caspar David Friedrich, “A feeling of hopelessness emanates from this vanishing landscape, the hopelessness of mankind observing its loss while simultaneously dwarfed by its overwhelming magnificence.” Furthermore, the physicality of the iceberg evokes another crucial aspect in Charrière’s practice – time. He sees the iceberg as a storage of time, and, by melting even a tiny bit of this natural monument, he deletes information contained in the ice. By doing so he connects the earth’s past to its future, a sinister notion which is also immanent when thinking about the impact of the Anthropocene.

The artist's interest in the effects of the past on the future developed further with his work originating from the U.S.S.R.’s nuclear test site, Semipalatinsk in Kazakhstan, which he visited in 2014. “Such places are ‘future fossil spaces’, where something that began in the past continues to have an impact on now and the future.” Starting and ending with the symbolic ticking of a clock, the 16 minute film Somewhere shows the landscape of the test site where the radiation exposure reached extremely high levels between 1949 and 1989 and is still active today. Filmed in slow motion and accompanied by trance-like sounds, the abandoned buildings surrounded by a grey-brownish landscape evoke an eerie and disturbing feeling – a site forever haunted by the past. The radiation impact becomes even more apparent in the black-and-white analogue photographs entitled Polygon. The deserted monolithic buildings, which are sparsely positioned within the flat landscape, are soberly documented. Afterwards they are double-exposed through radioactive material by scattering thermonuclear strata on the negative, creating white spots and showing the usually invisible radiation. To some extent, the spots reveal a more accurate image and show the site for what it really is: a post-apocalyptic and violently melancholic site, a shrine for a ruined future. During this expedition, not only the photographs, but Charrière himself as well, were exposed to the radiation.“ I cannot start to talk about a subject without experiencing it, so if I want to engage with an atomic test site or a place of radioactivity, I need to go there and expose myself to understand what it means. I think it's crucial for an artist to be exposed.” Charrière often takes risks on his expeditions, whether he is climbing an iceberg in the Arctic, spending time on a former nuclear test site or diving with sharks, sometimes 60 meters deep, which serves the purpose of a profound insight rather than experiencing a thrill: “(…) in my case it's not about wanting to be an epic adventurer-artist; it's much more about the aim for an encounter which leads to a deep understanding of a place or a particular situation.”

In 2016, the artist travelled to Bikini Atoll in the Marshall Islands in the middle of the Pacific Ocean. Similar to Semipalatinsk, Bikini Atoll is a former nuclear test site, which was used by the Americans during the Cold War. Now completely uninhabited, only concrete bunkers are left to be overtaken by nature and active radiation. At first glance, the large format series of colour photographs, First Light, portrays a cliché of a tropical paradise – the beach, the ocean, palm trees, and bright sunsets. Now that this paradise will never be free of its toxic radiation, the romantic sunsets allude to atomic ‘second suns’. Similar to Polygon, white spots cover the photographs, which stand out all the more on the colourful backgrounds. Like blurred snowflakes within the typically idyllic tropical island scenes, they seem even further out of place, emphasising that what they are portraying was never supposed to be there in the first place.

The 24 minute, 4k colour video Iroojrilik originated from the same field trip, for which Charrière filmed the landscape and underwater world of Bikini Atoll. Not using any archival footage, the importance of the physical involvement with the environment underlines the importance of Charrière’s travels. “Travelling for me is a way of being able to send messages, charged with both rational and subjective meaning while being closely linked to experience and life. My interests lie not only with the information but with the physicality, the territorial or geographical characteristics of these meanings, the spaces in which they evolve and the feelings they evoke.” Depicting the atomic-industrial architectural decay, the gigantic shipwrecks lying at the bottom of the lagoon, and the wildly growing nature, the video shows the interplay between anthropogenic and natural transformations, which can be observed in most of his works. The impression of an Atlantis or a lost civilisation is enhanced by the abstract and – at times – threatening sounds by Edward Davenport.

His long term collaborator DJ Inland (Edward Devenport) also composed the soundtrack for Charrières latest project. An Invitation to Disappear started with a field trip to a palm oil plantation in the Far East and gives its name to a film, an exhibition, an album, as well as a club night last Fall at the infamous Berghain in Berlin – a destination more easily reachable, but not any less intoxicating, flushed with colourful steam and a techno soundtrack mixed with tones of the original site. “An Invitation to Disappear at Berghain is an audiovisual excursion into the heart of both the dystopian and paradisiac landscape of palm oil plantations oscillating between nature and artificiality.” Palm oil is extracted from the fruit of the oil palm and is used as a component in most products, such as chocolate, skin cream, candles, washing powder etc. The consequences to obtain it, however, are severe. With their poisoned grounds and cleared rainforests, these grounds evoke a mixed feeling: “The plantation has a strange, magnetic power, making you feel simultaneously fascinated and repulsed, and the almost prehistoric presence of the geometrically arranged trees in this seemingly endless maze leaves you breathless.” By staging certain parts of this bizarre scenery in a nightclub, it becomes more accessible. The party goers are active participants and experience this transformed landscape rather physically and emotionally than cognitively.

All of Julian Charrière’s works can be seen as a standing invitation to disappear, or rather, to emerge oneself in a parallel world, to (at least mentally) travel to these peculiar destinations. In a similar way to Charrière’s travel approach of deeply immersing himself into these environments in order to gain a profound understanding, the resulting works make complex contents intuitively comprehensible. The aim of Charrière’s works is not to point a finger or to criticise, but to evoke wonder in the viewer; after all, it was and is us humans who transformed these former utopias into dystopias and although most of us will never physically travel there ourselves, we are aware that they exist on the earth we all inhabit. 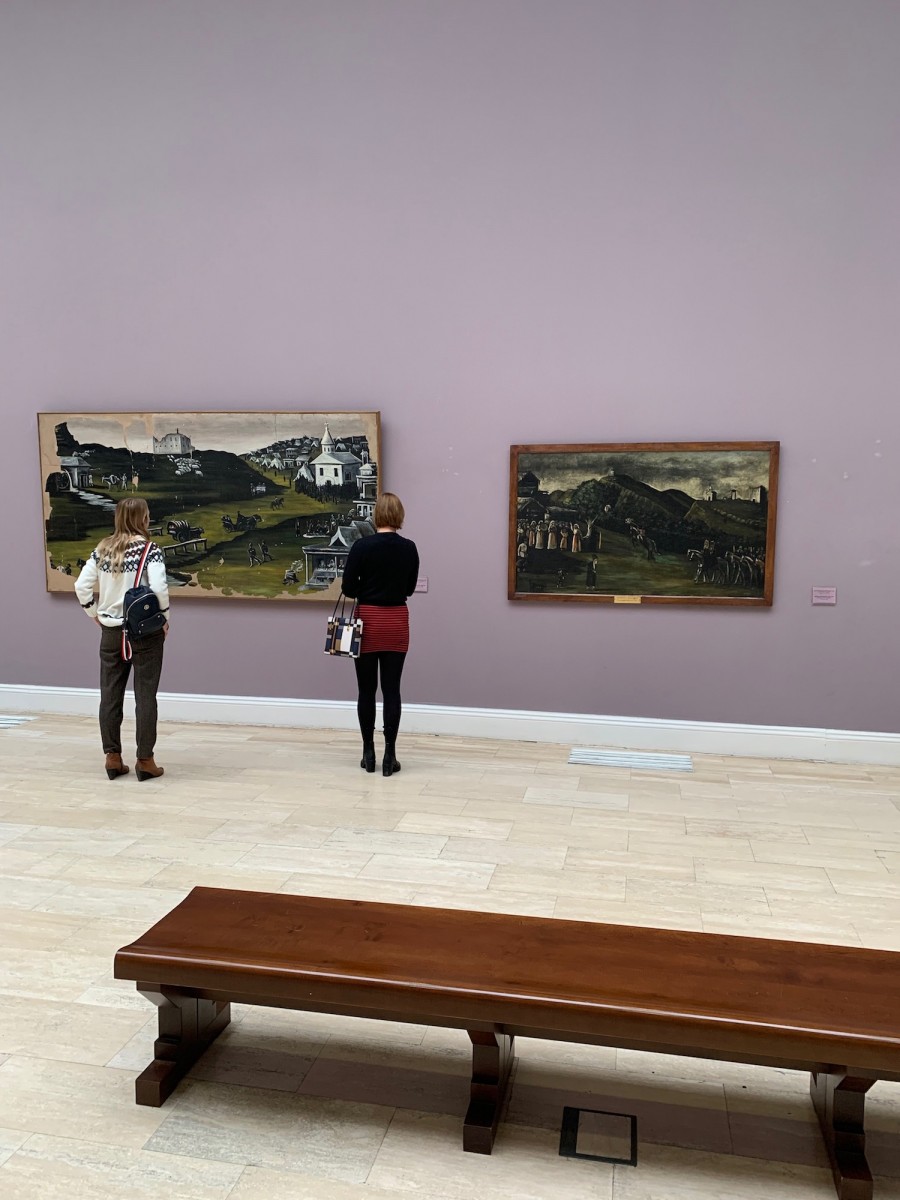