Home Away From Home

Les Rencontres d’Arles: Gaza to America, Home Away from Home by Taysir Batniji

At this year’s photo festival Les Rencontres d’Arles, Taysir Batniji presents his solo exhibition Gaza to America, Home Away From Home, curated by Sam Stourdzé, the festival’s director. Founded in 1970, Les Rencontres d’Arles is the oldest photo festival in Europe and one of the most important gatherings on the photography scene. Its official programme consists of 36 exhibitions, shown at different venues all around Arles. Among the places to visit are a number of deconsecrated medieval churches such as Chapelle Saint-Martin-Du-Méjan, where Batniji's exhibition is shown on two floors.

Gaza to America, Home Away From Home is part of the America Great Again! section—a title whose irritating use of Donald Trump’s rhetoric ironically contradicts the image of America suggested by the photographers. In addition to Batniji, the section also features Robert Frank’s legendary photo series The Americans (1958) in the Espace van Gogh and Paul Graham’s exhibition, The Whiteness of the Whale, in the Église des frères prêcheurs. There are also exhibitions by Raymond Depardon and Laura Henno. In this section, we are confronted with a critical image of America as seen through the eyes of a Swiss, a British, a Palestinian and two French photographers: “More than other places America is nourished by the foreign,” says Stourdzé.

The idea of the foreign not unfamiliar to Taysir Batniji, who was born in Gaza but has not been able to return since 2006. He first studied art at the Al-Najah University in Nablus, Palestine and later in Paris, where he has built up a renowned oeuvre that spans photography, video, installation, painting and performance. He has had exhibitions at the Jeu de Paume in Paris, the Venice Biennale, and at the Martin-Gropius-Bau in Berlin, where he presented his performance Impossible Journey in 2009, which involved shovelling sand from one corner to another and back again until the point of exhaustion, a Sisyphus work in which he addressed waiting and its futility.

In Arles, Batniji is showing his new series Home Away from Home (2017) on an entire floor. In 2017, he travelled to California and Florida where he photographed his cousins who had emigrated from Gaza between the 1960s and 1980s and whom he knew from his childhood. The series was created as part of Immersion, a residency programme organised by the Hermès and Aperture Foundations.

The exhibition also includes a retrospective of his earlier work, for example his series of Israeli Watchtowers (2008) in which he references Bernd and Hilla Becher’s typologies of industrial buildings and structures. Like the Bechers, Batniji too presents his Watchtowers photographed from a similar angle and organised in grids, but a comparison of the two series reveals dramatic differences. While the Bechers were able to study their motifs of disappearing industrial architectures closely and take photographs of their “anonymous sculptures” with large-format cameras, Batniji’s Watchtowers were sometimes recorded hastily, sometimes from afar, and sometimes using existing footage, as the motif can prove life-threatening for a Palestinian. For the series Gaza Houses (2008-2009), Batniji asked the journalist Sami al Ajram to photograph houses destroyed by the Israeli army in the Cast Lead against Gaza operation (28 December–18 January 2008). Batniji presents these ironically as real estate ads. It is, however, his Gaza Diaries that are the most touching and intimate among his earlier works. The first Gaza Journal Intime is a video that he recorded in 2001, a few weeks after the outbreak of the Second Intifada. The second and third Gaza Journal Intime are photo series photographed by Batniji in Gaza City and later organised into thematic series, e.g. La ville/The City, Chez moi/At Home, La mer/The Sea. They show the everyday lives of individual people rather than a media image depicting “shapeless, masked, veiled, crying or shouting Palestinian masses,” as Batniji notes. As Batniji can no longer travel to Gaza himself, these photographs also serve as an archive of memories of his homeland.

Gaza is also the reference point in his series Home Away From Home. In this series, Batniji photographed and interviewed his families in California and Florida, recording their everyday lives and their homes. The exhibition also includes drawings and archive material and is accompanied by diary-like texts.

“My original home is Palestine. But this is a home away from home. Yes, like home.”

This is the answer Batniji’s cousin Khadra, who lives in California, gave to the question of whether she feels at home in the US. Her response forms the title of this powerful series in which Batniji discusses the exile of his family members and, in turn, himself. Until the work was created, Batniji had not seen some of his family members since his childhood: His cousin Kamal, for example, emigrated in 1968 when Batniji was only two years old. He still remembers, however, his cousins coming for a summer holiday to Gaza, playing under the palm tree in the courtyard of Khadra and Ahmed’s family home. Ghosts of these childhood memories re-emerge on Batniji's trip to the United States, in the faces of the nephews and nieces that he has never met before.

With the theme of migration, Batniji addresses an old topos of the United States. In California, his cousins’ careers represent successful migration stories. His cousin Kamal, like all his California cousins, is a physician by profession and seems to embody the American Dream. In an interview, he talks about his career, including his trips to congresses in Israel where he visited the holy places. He was able to find his second Holy Land in California, as he explains in the interview. We also learn that he voted for Trump. But Batniji seems to be less interested in these contradictions than in photographing such ambiguities coexisting next to each other. We look at a luxurious villa in a gated community, at interiors richly stocked with family photographs, including a photo of Kamal with George H.W. Bush. On the other hand, there is a calligraphy of a Quranic verse, magnificently framed and placed above a giant television. In one of the texts, Batniji enthuses about all the sophisticated Palestinian dishes he is served. At the same time, however, Batniji describes a sense of foreignness that only seems to have been overcome in the photographs of Florida.

The photographs Batniji took in Florida are his most vivid ones. Unlike in California, where Batniji spent a lot of time alone inside the houses, in Florida he accompanies his cousin Ahmed to his grocery store located Palm Beach, a poor neighbourhood with a large African-American community. At the store, Ahmed—who has renamed himself Adam—warns Batniji not to cross the street in front of the shop, as district is too dangerous. A photograph shows a revolver behind the counter of the shop. However, Batniji gets to know the customers, some with tattoos and gold teeth, revealed as they smile into the camera. While villas in gated communities in California seem to prevent encounters with others, it is the contact with the outside world, made possible through the grocery store, that makes this picture so vivid.

“I am the other half,” are the words of Ahmed’s youngest daughter, Safa Batniji. The exhibition Gaza to America shows her interview via a big projection. In just a few words, she manages to answer complex questions about belonging, how she perceives herself, how others see her, and what it means to grow up in Palm Beach with a Palestinian father and a Moroccan mother. In the interview, Batniji asks her whether she intends to travel to Palestine, especially Gaza. Her answers indicate that she feels Americanised and that she would probably feel alienated from her Palestinian family in Gaza because of her different appearance and her different dialect. She would rather travel to Palestine with an organisation later on, when she is older. Her idea of Gaza is based on videos from her aunt of beaches and vast lands—i.e. on ideals rather than reality—and she is aware of it.

This representation of the next generation, embodied by Safa, conveys both a romanticised image of Palestine on the one hand and a confrontation with the current dangers of the region, which she experiences only via the news media, on the other. In Safa’s words, we also find the same ambiguity that Batniji captured in his photographs of the homes and everyday lives of his cousins. After his trip to the United States, Batniji asks his niece Rehaf in Gaza to photograph the family home. In a Petersburg hanging, the poetic highlight of the exhibition, these photographs are shown together with delicate drawings in pencil and watercolour, which Batniji painted before and during his trip to the States. They show his memories of his cousins and the summers they spent together. There is a drawing of the palm tree in the courtyard of the family house and the hole in the wall to the neighbouring garden. Rehaf’s photographs, however, reveal a different reality. The palm tree no longer exists, and the hole in the wall to the neighbouring garden is no longer available. Taysir Batniji also draws suitcases, open suitcases, the family on the move, an airplane window, an image of the interim state between leaving and arriving, between a romanticised childhood memory and a threatening present day, between Gaza and America.

Les Rencontres d’Arles runs from 2 July until 23 September 2018. The bilingual (EN/FR) catalogue Home Away From Home catalogue was published by Aperture this year. 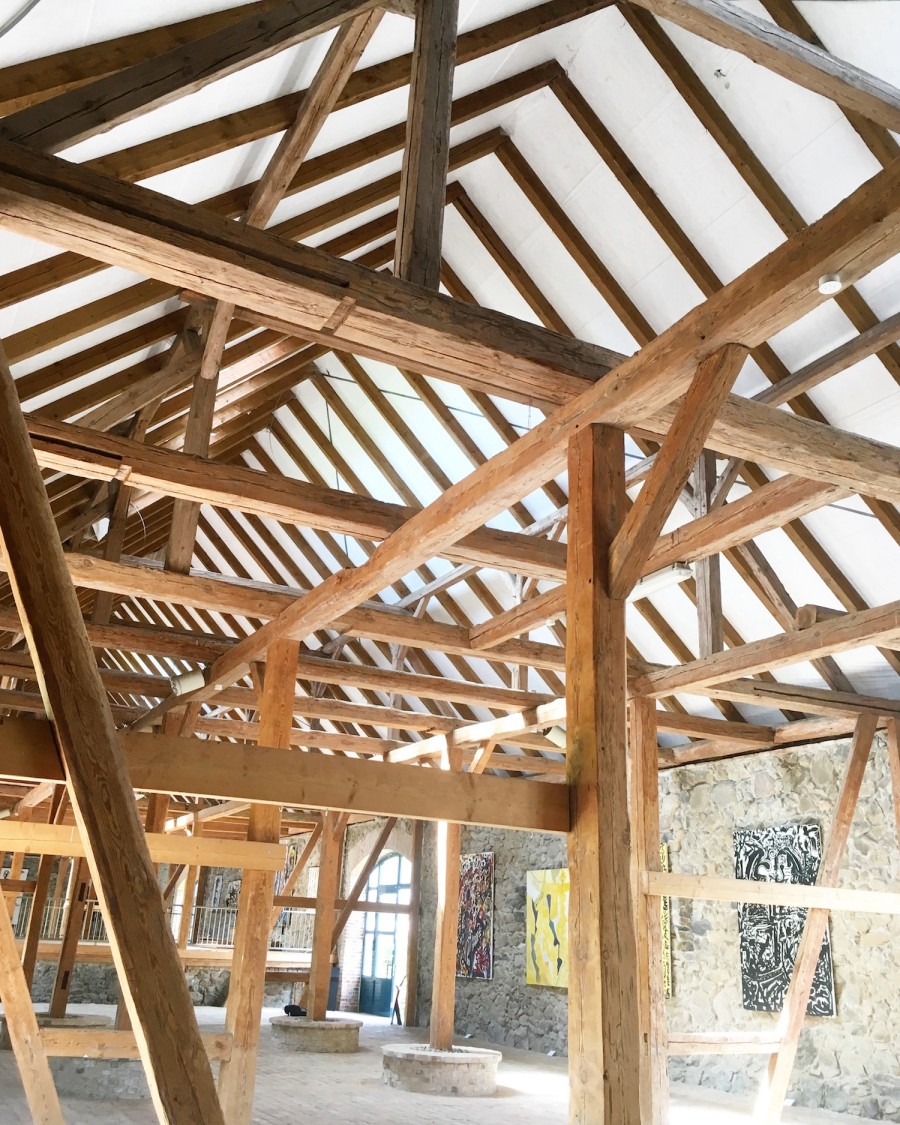