A guided tour of ‘Ostalgie’ with Henrike Naumann

Interview by Nina Prader.
Special thanks to Alison Hugill and the Berlin Art Link Team

Note WAN: Although this exhibition is over, we would like to share the timeless article with you.

Once again, Henrike Naumann is tasked with installing the last exhibition in a space before a change: ‘Ostalgie’ is the farewell show at KOW’s Brunnenstraße address. In this “Abrissparty” (demolition party), Naumann could be a heroine on a mission straight out of the postmodernist movie Blade Runner. Guiding us through the time-travel of her 3-level installation, Naumann collapses caricatures of the Flinstone Age, the GDR and Germany’s present political moment onto themselves; she offers a cross-section of German society in the guise of a furniture store display.

On the first level, we find the empty mauve-colored shelves of a former East German shoe store from Perleberg, North Brandenburg, salvaged via eBay Kleinanzeigen. Then, we take a steep dive down the gallery’s staircase into Naumann’s visual interpretation of an “Urgesellschaft” – a foundational society. At the opening, this was the stage for 41issa’s post-socialist and pre-historic Gabber concert. The furry purple sofa on the wall was turned into the turntable decks. Visitors were invited to reenact partying at a nostalgic GDR rave. The final level relates to reworking the history of the German World Exhibition of 2000 and the Treuhand, a special institution tasked with selling former properties of the state-owned East German industry. In addition, she has a retrospective of her exhibition at the Museum Abteiberg, Mönchengladbach. It’s a reflection on postmodern interiors, such as the German household fixture of the “Schrankwand” (closet wall).

The exhibition performs a memorial service, reacting to local, personal and collective histories. The power struggles and cultural undertones of GDR history are made visible, Naumann’s tools for subversion come in the form of vintage furniture. Interior landscapes shed light on the relics, ruins and paraphernalia from the home and hearth. We meet historic adversaries such as Birgit Breuel, the former president of Treuhand Agency and Commissioner General of the Expo 2000, painted as a kitschy portrait and gifted by the United Arab Emirates. Cameos also include plush mascots from before and after the fall of the wall, like Rolf, the shady yellow hand with sunglasses, who waved the new postal codes into a reunified Germany, and Twipsy, the icon of Expo 2000. In ‘Ostalgie’, Naumann ushers dark and humorous skeletons out of Germany’s closet to unearth a critical space for discussion on East German identity politics.

Nina Prader: Is there any object here that transports you personally? A certain object trigger that makes you time travel in regards to the time capsule you are creating here?

Henrike Naumann: This stuffed toy gnome, which is a character from a children’s show in East Germany, Pittiplatsch, is a symbol of how my East German childhood has arrived in the West’s system. I put him in this dollhouse Ikea Poäng chair. This encapsulates what my work is about. In regards to [our location in] Berlin-Mitte, it would probably be the gas mask of the NVA (National Volksarmee), the army of the GDR. You can buy them at Alexanderplatz today. It’s one of these bizarre Berlin tourist souvenirs. I find it very brutal. It refers to the Cold War, crisis and destruction.

In this video work, Die Monotonie des Yeah Yeah Yeah (Eastie Girls) (2019), I deal with these 90s raves that took place in rural East Germany as an outlet for remembering everyday culture from the GDR. We see two blonde East German girls portraying what could be an East German woman in the 90s. Looking at it now, it is a bit disturbing to see these FDJ (Free German Youths) girls with navel-bearing blouses, red ties and booty shorts. I put gas masks on them in the clip to show this weirdness of remembering war and crisis within a party subculture. They are called the Eastie Girls and also, I reference them with these blonde wigs with bone berets, a Stone Age twist. The Stone Age is a narrative throughout the whole exhibition. ‘Ostalgie’ is a term with a lot of meanings. It reflects a longing for the “exotic” East. I try to give it a new meaning. The GDR is as long gone as the Stone Age. At the same time, it is still around when I go visit my family and my hometown; the ruins from ages ago.

NP: We are now standing here at this sign that says “West”, looking down this staircase. When we descend, where are we going?

HN: Let’s focus first on the process of going down the staircase. My work always tries to work with the architecture of a space. In this case, the Arno Brandlhuber architecture of the gallery was a challenge to incorporate. Brandlhuber built this entire building out of a ruin. He conserved the ruin by paving it. That was an aspect I found interesting; my work is interior design but reacts to the architecture. What are the rules? What am I left with? In the installation, everything becomes part of the work. This grey, visible and invisible staircase is very prominent. I knew I had to interpret it. So it became the “Marxist society staircase”. In Marxism, society develops like a staircase from the “Urgesellschaft” – the prehistoric primitive society – into a “slaveholder society”, capitalism, socialism and eventually to the big goal of communism. But, in my staircase, we end with neoliberalism, the shop in which we started.
Now, we go down and we travel back in time. On the banister wall is the original school material on Marxism: “Das Wesen der Sklavenhaltergesellschaft” (The Nature of the Slaveholder Society). I framed these little posters with plastic bones to show its familiarity. My parents remember this material from their GDR school days. However, in our society, it is something from a distant past to teach Marxist ideas in a classroom. We reach the second floor, passing Marx’s pillow-face on a bone chair.

NP: He’s the godfather watching over us. This level is like an Alice in Wonderland LSD trip to the GDR. This is where I start getting dizzy as a viewer. Is this a dream, a nightmare or a memory?

HN: Depends. For me it was, of course, a dream come true but the set-up was complicated and labor intensive. When I put all these small objects, like the books from the GDR Die Verfassung der DDR (The Constitution of the GDR) and the bones and the flag especially, it got weird. Then it changed from this fantasy furniture situation on the wall, pulling me down. I realize my work is about transporting a certain ambivalent emotion. There is always a hook.

This floor is the ‘Urgesellschaft’ itself. I tried to find a way to show the end of the GDR. The systematic change and the end of a certain society as a way of transferring it into a physical space. By collapsing the space, I wanted to show the feeling of losing a state and the security of knowing how a state works and what laws apply through bodily experience. This limbo feeling when a society ends and a new one you do not understand yet begins.
NP: A centerpiece in this trippy living room situation is the flag that reads, “Hüte dich for Sturm und Wind und Ossis die in Rage sind” (Beware of storm and wind, and furious East Germans). Where does this flag take us as someone who is not as well versed in these triggers?

HN: This flag is from eBay. ‘Ostalgie’ stores are a commercial industry, selling stuff reminiscent of the GDR. But then there is also stuff like this that is contemporary. It is very brutal. We see the GDR emblem, there are two guys on either side holding a hammer and sickle as weapons. They are holding it in their bloody hands. For me, this flag speaks about the self-identification of the East German as someone who is tough and harder than the rest of Germany. So I wanted to speak about this through the lens of how East Germans create their own image.

As an artist, I am very dedicated to speaking about the East because it is a part of German society that I know and I can speak to. I can add something to the discussion that maybe someone else cannot. I lived there and I know people with different political youths and I saw the radicalization to the right first-hand from its beginning in the 90s, as a youth culture, to people voting for the AFD now. It is very important to me look at the racism, hate and fear in the GDR, to debunk notions that it happened after the fall of the wall, to put it in a larger picture. I also want to reflect this ‘Ostalgia’ in the frame of the exhibition. Viewers want an explanation from me why things are the way they are. Why do people vote AFD? There is a danger I might become that person who always has to provide an explanation. Then I become an ostalgic gimmick myself, and I want to avoid this. I want to show the complexity and enable people to have a bodily experience in this installation and then get into a new discussion with each other.

NP: You are working like an archeologist here, excavating different bones from the past, sometimes super-loaded with very negative energy. How do you tinker with them? How do you place these objects to trigger something else than what they are?

HN: I am interested in what I am appalled by. I want to get close-up in order NOT to participate in dividing society even more. I want to have people with different opinions clash and get people out of their comfort zone. We are losing the skill to be able to talk to someone who feels differently. People that radicalize in a right-wing way often incorporate East German identity or ideology. It seems very odd because socialism and right-wing politics should not work together. After the fall of the wall, the experience of the East German was erased. The narrative of “united” Germany was under the law and order of West Germany. This idea that everything that was from the GDR, after 1990, was wrong, created a gap in people’s lives. I am trying to take this East German narrative away from these right-wing forces to open up a new discussion. I want to bring back topics from the drawers of history, like the Treuhand. I want to discuss the injustices of so-called German unity, but not in support of right-wing politics but to create an alternative way of speaking, a forum to discuss this.

NP: All of this is now a storage unit for East German meets contemporary German, past and present identity. Is there an object that takes us forward?

HN: The motivation for me to talk about this history is to speak about today. I see it as what is happening right now. The future is a challenge. I am trying to achieve a new perspective for now. This is not without alternatives, because in 10 or 30 years this will also be part of recent history, and we will look back and think why did we not do anything in the moment. I cannot give the future back to people. I want to react to the present and how the future can look for us all together.

This article was originally published in berlinartlink.com 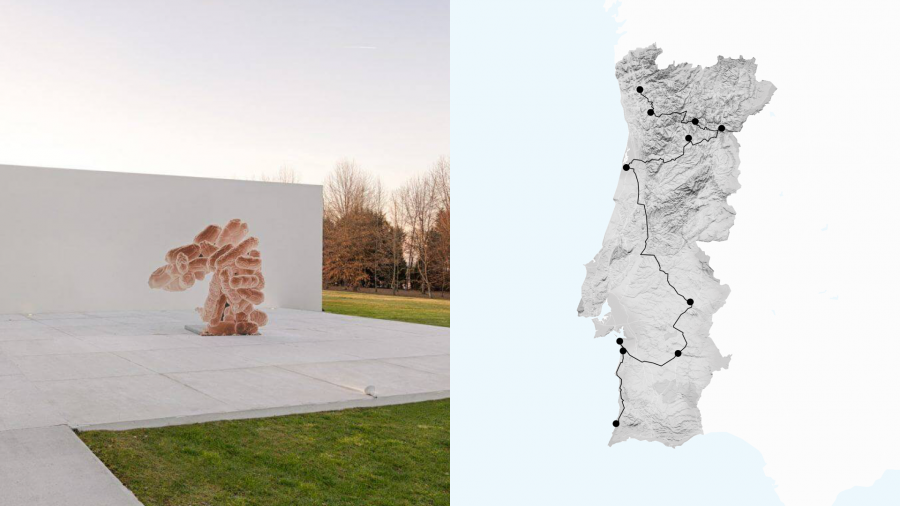