In his photographs, artist Anton Roland Laub addresses the urban conflicts, their history and the absurdities surrounding them. Moreover, Laub’s photos point out the effect of time in the urban context and how state politics manipulate time and space. In his recent project, Mobile Churches, the artist focuses on a 1980s phenomenon in Bucharest, Romania, where he grew up. In the interview, besides talking about the history of the relocated churches on rails and his travels to Bucharest from Berlin – mentally and physically with his camera – the artist mentions his approach when dealing with such (hi)stories and the influence of method of loci – linking memories to specific locations.

You got shortlisted for the Dummy Book Award with your photo book Mobile Churches at Unseen Photography Festival in Amsterdam as well as at Les Rencontres d’Arles, the International Photography Festival. It is recently published − edited by French curator Sonia Voss and designed by Japanese graphic designer Minami Shimakage (with essays by Sonia Voss und Lotte Laub). Throughout the month of November, the photo series Mobile Churches will be on display within the festival Photo Saint-Germain in Paris.

How did this project start?

I grew up in Bucharest but left the city in 2000 when I would have had to vote for either a post-Stalinist or a nationalist presidential candidate. I was tired of the political situation there, so I said goodbye. I had not visited the city for several years when I went there with my partner Lotte Laub. In Bucharest, religious people cross themselves when they see a church – and sometimes when they don’t. When Lotte asked me why people on public transport were crossing themselves, I told her that the church might be hidden in the backyard of a building, behind the façades. This was the impulse behind the inspiration to start working on a photo series dedicated to the seven churches that were relocated and hidden while a third of the old historical city was being bulldozed and rebuilt.

As a kid I learned two examples of relocating big objects and houses in history classes. One of them is related to the conquest of Constantinapole/Istanbul. Fatih Sultan Mehmet’s forces moved huge ships from the land by rolling them on wood. The second one is called Yürüyen Villa (The Walking Villa). There was an old plane tree near one of the villas of Atatürk, the founder of Turkey, that at one point started to damage the roof. Instead of cutting the tree Atatürk wanted the house to be removed on rails. How was it in Bucharest? Could you tell more about the history of these removed churches?

As far as I know, the first building that was relocated whole was Marble Arch in London in the mid-19th century. A more recent example is The White House project in which Rosa Parks’ home was dismantled and brought from Detroit, Michigan to Europe by the artist Ryan Mendoza, who lives in Berlin. The house is now permanently installed in a backyard in the city’s Wedding district. The house was due to be demolished in the US but Mendoza wanted to keep Rosa Parks’ spirit alive. Two different examples from this year are the medieval tomb that was relocated in Turkey to escape flooding, and a Buddhist temple in Shanghai that was moved to avoid the risk of fire.

Wooden constructions and small churches have been moved and reassembled in Romania for centuries. But it is the absurdity of this action that captured my interest most, rather than the technical aspect: spending lots of money to put buildings on rails and move them for ideological reasons. In fact, I grew up with this phenomenon in the 1980s. Back then, Romania was very poor, but more in an artificial way, as it resulted from Ceaușescu’s economic strategy. He received huge credits from Western banks because Western governments sympathised with him on account of his difficult relations with Russia. He created a form of nationalist communism in Romania. Then it was payback time and he decided to suppress the population’s quality of life to make the people pay these debts. From around the late 1970s to the start of 1980s, goods were mainly produced for export. The problem was that the dictator misinvested. Besides that, he also had the ideal of generating a communist society devoid of religion.

During a visit to North Korea and China, Ceaușescu saw the professional way the Cultural Revolution had been carried out using the power of architecture and big- urban design with big avenues, similar to the Soviet Union. Unlike North Korea, however, the dictator decided to do this in the centre of Bucharest. Merely for propaganda purposes, Ceaușescu had almost one-third of the city’s historical centre, including an Art Deco-style stadium and the Jewish neighbourhood, demolished. He was driven in this by his anger towards the past and the bourgeois culture in Bucharest. Some buildings were demolished while others were relocated on rails, as this was the cheaper option.

How did you trace these removed buildings? Considering the churches, which was your main topic, have you also checked the previous places where they originally were?

I was interested in the absurd anti-religious politics of Ceaușescu, therefore I focused on the seven churches. There were also other buildings that were removed, for example to widen a street. Sometimes it was difficult to identify the old and new positions as in some cases the whole topography changed with street names etc. Even some names or hierarchy of the churches changed. I was asking people and researching, collecting as many books as I could. Only locals knew about the story of the churches, but newcomers weren’t aware of that.

I assume the city plan has changed enormously as well.

Exactly. For the book, we are using a city map from the beginning of the 20th century and superimposing it on the area that was demolished in order to show the drastic changes that took place in Bucharest’s urban topography under Ceaușescu. You were asking me how I started to look for the churches. I began by searching for those that I already knew of. I also tried to find a list of all the displaced buildings from the books that I had collected. Dinu C. Giurescu’s The Razing of Romania’s Past, for example, includes not only the displaced churches but also many other buildings that were destroyed, some of them of historical significance. Over time, I was able to identify all of the seven displaced churches. Later, I also met with Eugeniu Ion Iordăchescu, the former engineer who developed the displacement technique.

There are also religious buildings that weren’t bulldozed or relocated but instead had socialist housing blocks built around them, like a curtain. I took photos of these as well but only used one of them as an example in the book dummy: a synagogue with socialist blocks around it.

During the in-situ research what kind of camera did you use? How did it affect you to wander around while looking for the hidden churches?

First I started in a very traditional way with large format cameras. I was mainly shooting in black and white. After a while, I decided to be a little more mobile and changed the technique to middle format camera on color film.

I can imagine that with such a project, being mobile would have had such an importance.

I first did sketches on instant film like Polaroid then later with a pocket camera or smart phone. I increasingly realised that I had problems with taking pictures of the churches in the really narrow back yards. Normally, you need a very wide angle to do this, but I didn’t want that, so I switched to a digital camera and took two vertical shots of the buildings and stitched them together to avoid the dramatic distortion. A year later, in 2015, I also stopped using a tripod and wandered around freely with a 35 mm film camera but still used an architectural lens.

Could you please talk more about the method of loci, which you mention on your website and how you integrate this theory to your work?

In the first exhibition of this series at atelier 35 in Bucharest, I focused on the mnemonic aspect of the buildings, on the method of loci – linking memories to specific locations. This recalls Cicero's story about Simonides of Ceos, who discovered a new art of memory after a tragedy struck a banquet where he had been invited to recite poetry. Just as the poet was called outside, the roof of the banquet hall collapsed, crushing all of the guests to death and beyond recognition. Yet, Simonides could identify their mangled remains for family members since he remembered where they had been sitting at the table. In the same manner, the mobile churches have a mnemonic function. The crossing gesture reflects this phenomenon, too. You know there is a church behind the building and you interact with that memory, with the idea of an existing church. In the exhibition at atelier 35, I actually combined two series, the displaced Bucharest churches with façades from the Berliner Karl Marx Avenue. Striking typological similarities appear between the building facades of Karl-Marx-Allee and Bulevardul Unirii in Bucharest. Several visitors in the audience were perplexed as they thought the socialist façades are from their own city, Bucharest, but actually they were from Berlin. A former diplomat was also in the audience and for a moment she thought the images were from Peking.

You grew up with the knowledge of the Mobile Churches and afterwards, you’ve spent a lot of time with them. Throughout the time how did your relationship with the churches change?

For the 2016 Berlin Art Book Fair at the Academy of Arts, I presented a photo booklet focusing solely on the black-and-white pictures that I composed as diptychs (the booklet is now part of the Book and Media Art Collection in the Berlin State Museum’s Art Library). I wanted to pair the façade of the building covering the church and the church itself, despite the brutal intervention in urban history that this would illustrate. I also went inside of the churches. In this photo from Mihai Vodă Church, you can see a fresco depicting Marshall Antonescu, who was an ally of Nazi Germany (the Orthodox Church has always been connected to the State). In another photo shot in the synagogue (Sinagoga Mare “Poloneză”), the same person is described as a murderer. Often during the photography process, I discovered these kinds of contradictions and strange or unresolved remnants of the past. 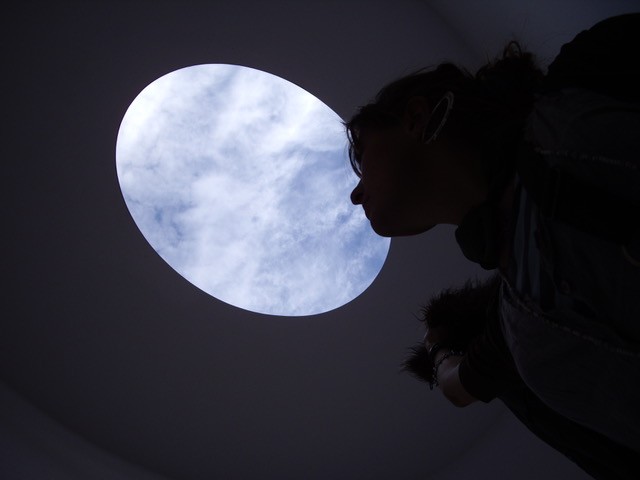