Through a photographer’s eye 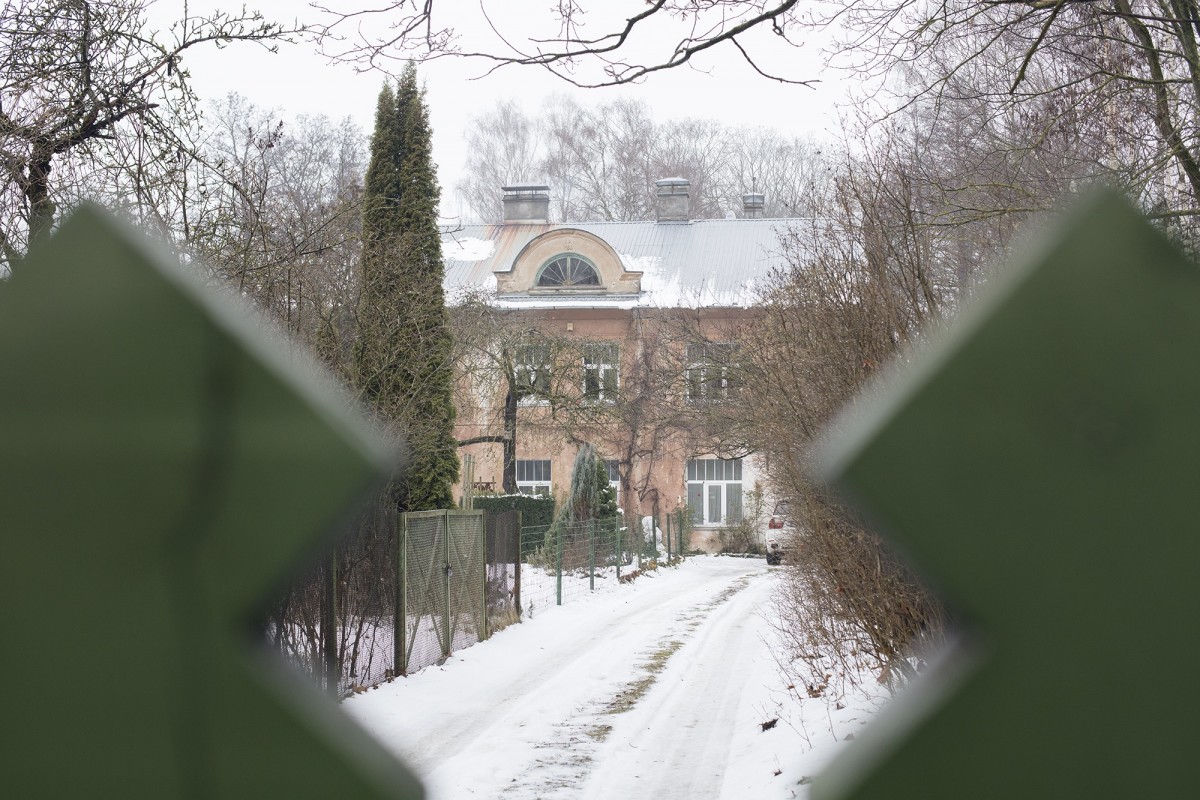 Kristine Madjare is a Latvian photographer specialized in portraits, fashion and personal documentary stories. She takes us on a (visual) journey through places in the city, where she finds inspiration, friends and adventures.

Together with the expat blog & guide book Life in Riga they introduce us to a cross-cutting survey through heterogeneous aspects of the city of Riga.

The photographic city guide is constructed in a way that gives the reader a personal testimony on experiencing the Latvian capital. Places discussed are rooted in the Baltic mentality, interrelated with the photographer’s contemporary statements, in which one can trace traditional references to the vernacular culture of this region, where northern, eastern and central Europe meet.

The questions asked by travel writer Lelde Benke guide us to imagine and better understand the cityscape of Riga, the capital of a relatively small nation with a complicated history.

Local photographer Kristine Madjare draws within her answers a line of arguments helping to unpack the identity of Riga, a city whose shaping has been an ongoing process since the breakup of the Soviet Union 29 years ago.

Lelde Benke When you look back at the years you’ve spent in Riga, which place stands out in your memories and why?

Kristine Madjare Dzegužkalns Park is very close to where I lived for the first few years after moving to Riga from the small town of Skrunda. I spent so much time walking around and getting acquainted with the city and would often end up in the park. The central hill is Riga’s highest natural point, so you get beautiful views towards the city center from its peak. It takes a while to clamber up the steep stairs at the entrance to the park. The park is pretty humble but beautiful, especially in autumn, when the leaves turn golden and in spring when the first signs of green reappear. In snowy winters, it’s the best spot for tobogganing. Nowadays, I go there with my niece and nephew.

Local insight: the 23rd of June is a very special date to visit Dzegužkalns. As solstices still bear meaning to many Latvians, this is when we celebrate Midsummer. The celebrations at Dzegužkalns honor tradition with folklore, music and dance groups taking part. One of the most impressive moments is when the wheel of fire tumbles down the hill to light the big bonfire. It’s also a rare occasion to catch a glimpse of Latvian folk costumes.

LB We all experience moments when we need to go outside in search of inspiration. Where do you find it in Riga?

KM I roam the streets of the Āgenskalns suburb, which is known for its grand old villas and some of the finest examples of Riga’s historical wooden architecture. A number of them have huge verandas and intricate details. Parts of the area make you feel like you’re in the countryside, they’re so green and peaceful.
Lots of people want to live in Āgenskalns. Kapseļu iela, Meža iela, Nometņu iela, Ernestīnes iela and Kuldīgas iela are the streets that give a good overview of life in the neighborhood and how it’s changing with the arrival of new residents and small businesses, like the zero-waste shop, Japanese-style izakaya pub, and hot dog specialist.

Local insight: On Saturdays, there’s a farmers and crafts market at the Kalnciems Quarter – a collection of revamped old wooden buildings. It’s a one-stop-shop for gifts and souvenirs. The team behind Kalnciems Quarter also revamped the nearby Āgenskalns Market with farm goods and street food trucks.

LB After a busy time in life, where’s your go-to place in Riga for clearing your mind?

KM Daugavgrīva at the mouth of the River Daugava, which splits Riga in half. In some ways, it feels like an independent republic. While visually dominated by Soviet residential architecture, one side of the area opens up to views of the Gulf of Riga and the other – to views across the River Buļļupe.
Daugavgrīva nature trail leads to the beach and a viewing tower, which birdwatchers love. It’s part of the Piejūra nature park. The beach has rolling dunes with long, silvery grasses blowing in the wind. Locals come here armed with supermarket plastic bags containing towels and shop-bought salads for a picnic lunch.

Local insight: Daugavgrīva is home to a star-shaped fortress dating back to the 17th century. It’s an impressive example of the Baltics’ remaining military heritage. You can either join a guided tour or visit during the annual Komēta culture and music festival in July.

LB The streets of Riga are full of enthusiastic cyclists. Where do you love to go by bike?

KM Lucavsala, the island in the River Daugava, but one part in particular – the southern end with the old allotments and garden sheds. Most of the time, I go there in search of new photography locations. It’s the perfect spot for trying to recreate a rural setting in the city if you don’t have time or the means to leave Riga.

Local insight: Concert organizers love Lucavsala as an open-air venue. Ed Sheeran and Rammstein played here. It’s amazing how an island just two kilometers long and one kilometer wide can host such different worlds. Humans and nature coexist. The northern end is like a public park with picnic tables, a playground, a wake park and a beach for swimming.

LB Where’s your favorite spot for people-watching in Riga?

KM Definitely the French bakery at Bergs Bazaar shopping arcade and Cadets de Gascogne patisserie opposite Bastejkalns Park on the border of the old town. They have some of the best croissants and cappuccinos in town, as well as stacks of local celebrity news and gossip magazines, which I don’t shy away from reading. A lot of well-known personalities hang out there. Besides, it’s also a really neutral setting for interviews and informal business meetings.

Local insight: Real Frenchmen own the patisseries. They’ve been fueling Latvians’ appetite for French pastries since 1999. These days they also bake vegan-friendly muffins.

LB When golden hour strikes, where do you go to enjoy the sunset in Riga?

KM The graffiti-covered Andrejsala riverbank beside the pier. It’s the kind of place where people often break the law by openly drinking in a public space, because people like to celebrate the sunset and togetherness with a beer. It’s nice and sheltered, so you rarely get cold before the sun goes down. It’s also an epic spot for watching the daily ferry sail by on its way to Stockholm. I’ve had a birthday picnic here with friends, we sat for hours and didn’t feel the need to move on to a bar.

Local insight: The small territory of Andrejsala is home to an interesting jumble of businesses and places worth visiting, like Edgars Ameriks’ peat workshop and art gallery, The Bunker quest and collection of civil defense artifacts in a 1970s bomb shelter, and First МИР – the glamorous kind of club that’s hosted artists including Ivan Dorn and Timati.

LB Where are your top hangouts in Riga for catching up with friends, grabbing a drink and maybe seeing a concert or dancing?

KM Bolderāja, Aleponija, and Kaņepes Kultūras centers are like an extension of my own living room. When I go, I always know I’ll meet friends or like-minded people, so I really feel as if I belong. It’s also comforting and nice to know that drinks are in my price range. They’re not the kind of places where people go to show off.
I really enjoy their events programs, you can catch niche performers and artists doing things like DJ sets and poetry slams.

Local insight: Look for groups of smokers outside rather than big signs to confirm your arrival at some of Riga’s best culture spots. Bolderāja doubles as a second-hand book shop. Kaņepes Kultūras centers houses Austra café with some of Riga’s best lunches and brunches. Aleponija has a resident cat who reaches unbelievable heights.

LB There are loads of international retail chains in Riga, but local shops tend to give deeper insight into a city and its social layers. Where do you buy bread in Riga?

KM I’m a big fan of the LaTS chain of convenience stores. They’ve saved me on many different occasions from late-night chocolate and ice cream cravings to mornings when you realize you’ve run out of bread for breakfast. Honestly, I don’t feel bad about going there in my pajamas and slippers.
The stores are tiny but packed with all the important stuff, even fruit, which is always at the right stage of ripeness – not too green, not too hard and approaching its use-by date. They also have a really good bakery section with Latvian favorites like jam buns, palmier pastries and local style “pizzas” with a layer of ketchup.

Local insight: LaTS is a union of local shops and cafeterias operating under a joint brand. You’re never far from one in Latvia. It might be useful to know that you can’t buy alcoholic drinks at shops between 10 pm and 8 am.

We ask Kristine additional questions about her exclusive Riga photographs series for WAN:

Where About Now When explaining your project ‘Inland’, 2011-2016 on the small town Skrunda in Latvia you claim to be looking through your images ‘for something familiar and unknown.’ How is this dichotomy reflected in the pictures of Riga?

KM I think I have the same approach everywhere I've lived for a long time. In Riga, I used to walk around my neighborhood and shoot a lot. Lately, unfortunately, I haven’t had the chance to do this so much. I like to repeat the same thing again and again, walk the same streets, photograph the same landscapes, and to see how the places are transformed by time, light and seasons, almost like investigating. I was doing the same in my project “Inland.”

WAN Your roots seem to be important for your photographic practice. Is Latvia your sole inspiration?

KM Latvia is definitely very inspirational. It's still quite raw and untouched, a mixture of everything and full of errors. It's so easy to get and shoot everywhere, and people are very open.

WAN In two of your pictures taken for WAN, you show a landscape with the Soviet architecture and in one, there is an empty space of the Dzegužkalns Park, known for its Midsummer celebration. Is it the question you would like to ask - about different histories that Riga carries as a city in itself: the mixture of Baltic and Soviet cultures, so visible in the architecture and urban setting?

KM I’m not specially searching for this contrast and it's not my main aim to show it in my photographs, at least I don’t notice it when I’m shooting. It just happens and is inescapable, but I really like this mixture. It's one of the reasons I like Riga.