A cultural road trip through the ages 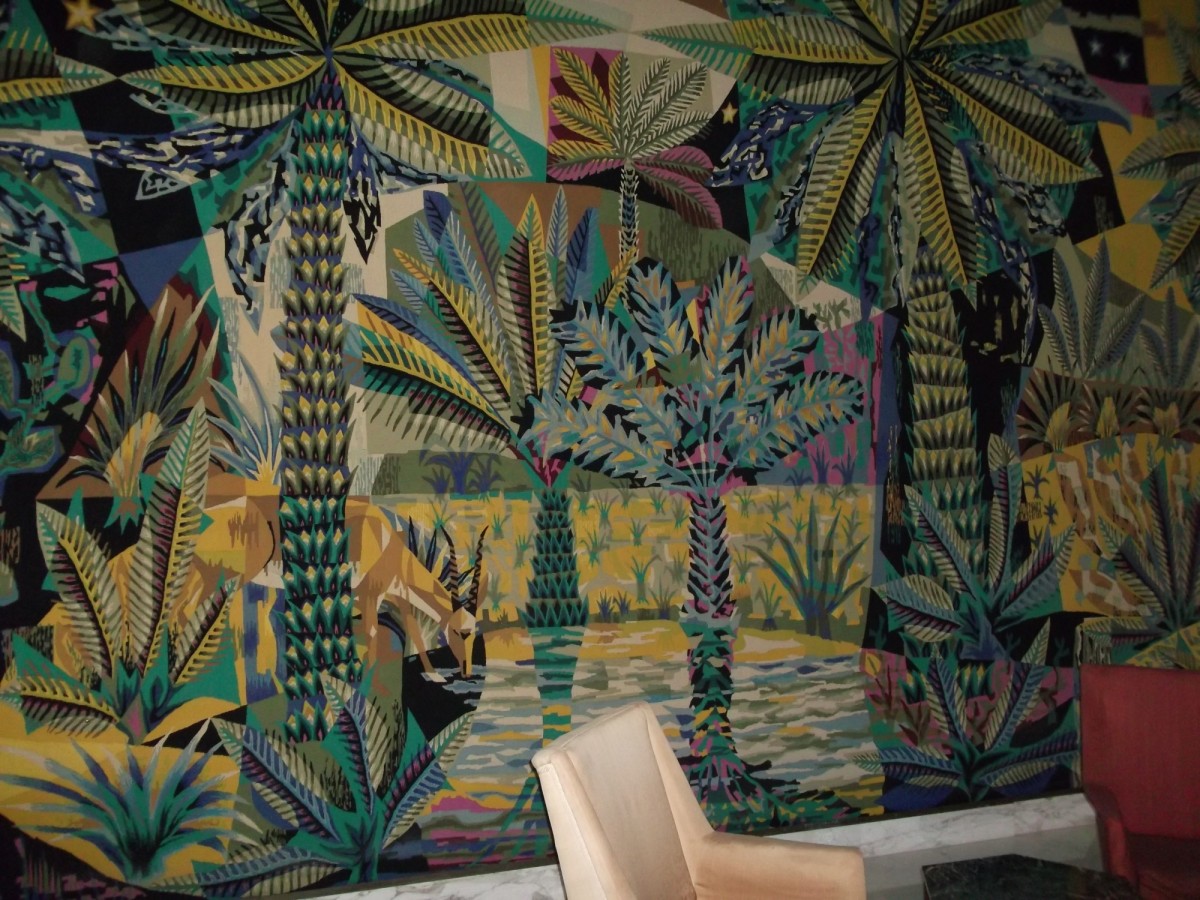 Cradled by the eastern edge of the Atlas Mountains and the northernmost dunes of the Sahara Desert, the central plains of Tunisia give way eastwards to a sparkling coastline that trims the Mediterranean Basin. For millennia, this sliver of fertile land has borne witness to a host of peoples and civilisations – Berber, Phoenician, Roman, Arab. More recently, the Arab Spring was sparked in the capital, Tunis, in 2011, and the nation’s fragile transition to democracy has been hampered by economic and political growing pains. Yet resilience is integral to Tunisia’s youthful spirit, and its peoples’ capacity for rebuilding is unbounded.

As a travel destination, the country has long been overshadowed by its more prosperous Maghreb neighbour, Morocco. Its moment is yet to come, and as the country paves its next phase of its future, there’s no better time to get acquainted with its entrancing landscapes and welcoming inhabitants. For the art and design enthusiast in particular, a cornucopia of treasures awaits – from serene guest houses to ancient mosaics, and a modernist villa with a promiscuous past. A road trip offers an independent way to discover the country at a flexible, unhurried pace. One suggestion for an itinerary that leads from the island of Djerba in the south to Tunis in the north, follows.

Upon arriving on the island of Djerba, off the coast of southern Tunisia, it soon becomes clear why it is known as “l’île des rêves” (the island of dreams). Steeped in a rich and layered history encompassing Berber, Arab, African and Jewish cultures, the charming isle, with its whitewashed, low-slung architecture and magical light, feels altogether otherworldly. Right in its centre is the village of Erriadh, a maze of cupola-topped architecture set amidst palm, date and olive trees. The translation of Erriadh as “peace and tranquillity” is apt – its laid-back pace of life it makes it an ideal retreat – and nowhere embodies its spirit better than the guest house Dar Dhiafa.

Five archetypal houch buildings are joined by shady patio nooks, alcoves overflowing with creepers and terraced roofs to lounge the afternoon away on. Featuring 15 rooms, a restaurant, two pools and a hammam, the guest house was carefully decorated by its owners, Slah and Chiara Allani, with found furniture from around Tunisia, and select artisanal objects: hand-blown glass, hammered copper plates. Despite the allure of Djerba’s natural beauty, you wouldn’t be blamed for not wanting to leave this sanctuary of restrained luxury and its perfect constellation of life’s simple pleasures.

Among the many delights of a stay at Dar Dhiafa is having one of Djerba’s most striking attractions literally on your doorstep. Since 2014, the ancient village of Erriadh that it calls home has been transformed into an open-air museum; its walls showcasing unique works by 150 acclaimed street artists of 30 nationalities – ROA (Belgium), Phlegm (UK), and Know Hope (US) among them. From arresting large-scale murals splashed over walls to delicate illustrations of a more subtle scale, the art project has breathed new life into Erriadh, turning a stroll through its sleepy blue-and-beige alleyways into a visual treasure hunt. While some of the works faded over time, preservation and restorations efforts are underway, and new additions pop up now and then, in keeping with the village’s infinite capacity for evolution.

Ceramic crafts have been integral to Djerba’s history since ancient times, having been introduced to Tunisia by the Phoenicians. The island’s rich clay reserves are especially plentiful around the village of Guellala, which has become synonymous with the pottery its local families have been creating for generations. Clay is mined on site still today, and mixed with water before use – turning white with salt water, and red with fresh water. Perched on a picturesque hilltop, the village abounds with pottery studios, specializing in their own variations of pots of all shapes and sizes, tableware and decorative items. Situated at the city’s crest, 50m above sea level, the Guellala Museum preserves the story of village’s artisanal history, while offering excellent views out over the island courtesy of its observation tower, which is best visited at sunset.

When Romanian millionaire George Sebastian fell in love with the fishing port of Hammamet during the early 20th century, he enlisted Sicilian builder Vincenzo Dicara to create his residence. Set within lavishly landscaped gardens, the concrete-and-stucco mansion is a modernist’s dream, fusing midcentury modernist traditions with the graceful curves of traditional Arabic architecture. Dar Sebastian soon came to be a haven of hedonism, hosting the who’s who of the international jet set, from Jean Cocteau and Elsa Schiaparelli to Paul Klee. Frank Lloyd Wright supposedly adored it; Winston Churchill wrote part of his memoirs here.

Eventually, the mansion was sold to the Tunisian government, who have preserved its legacy while sharing it with the public as the International Cultural Centre of Hammamet. Traces of the indulgences it once witnesses are still alluded to by the well-preserved artworks, fixtures, and interior quirks that reveal themselves on a tour through the property. There are marble busts, ornate custom built-in wardrobes, and a sunken marble spa bath for four – not to mention the outdoor amphitheatre, which is filled with culture once again every summer, during the Hammamet International Festival of Music and Drama. Yet a visit any time of year will spark the imagination as to the arc of Dar Sebastian’s illustrious if little-known history. If only its walls could talk.

Habib Bourguiba (1902-2000), the architect of the country’s independence and subsequently its leader from 1957-1987, is considered by many as the father of modern Tunisia. Though his legacy is complicated, he is lauded for his progressive stance on women’s rights and education in particular. In 2013, thirteen years to the day after his death, Bourguiba’s former summer residence on the outskirts of his native Monastir was reopened as museum that pays tribute to his life. Filled with day-to-day ephemera and beloved objects that once belonged to the statesman, including his Mercedes, the marble palace and its lavish rooms bear witness to Bourguiba’s taste for French modernist furniture and ornate tapestries – offering a fascinating insight into the life and proclivities of this redoubtable leader.

An epic trip to the Roman empire awaits in the otherwise understated plateau town of El Jem, in eastern Tunisia. Its main – eponymous – attraction is an amphitheatre that embodies the splendour of Roman architecture, and a tribute to Rome’s influence in North Africa. Notable for its oval, self-supported construction on flat ground – around 238 AD – the amphitheatre was inspired by Rome’s Colosseum, consisting of three levels of Corinthian arcades which remain largely intact. El Jem could accommodate 35,000 spectators, making it one of the largest amphitheatres in the entire Roman empire, and a sight to behold still today.

An architectural pitstop with a view that’s worth veering off the beaten track for, Ksar Hallouf (ksar meaning “fortified granary”) was built in the 13th century; its distinctive scalloped form comprised of two-storied ghorfas – long, barrelled storehouses for grain and other supplies, built from stone. Four sides frame what used to be a village square, and although the Ksar is now only used infrequently, looked after by caretakers from the tiny village below who might pour you a glass of sweet and hot mint tea from a beaten silver kettle, it’s not hard to imagine what a bustling point of meeting and trade this was throughout the ages. What hasn’t changed are the panoramic views Ksar Hallouf offers out over parched, sloping hills studded with clusters of palm and olive trees – an exhilarating landscape that lingers on the mind long after departure.

On a steep cliff just 20 km northeast of Tunis is the charming fishing village of Sidi Bou Saïd. Named after a 13th century saint, the destination has long attracted artists and intellectuals (amongst them André Gide, Colette and Simone de Beauvoir) thanks to its iconic blue-and-white architecture – a melange of Andalusian and Ottoman influences – its incredible views out over the gleaming Bay of Tunis, and its breezy azure charm. Park the car on the outskirts and wander uphill, winding your way through cobbled streets full of galleries, shops and street vendors selling the local specialty of deep-fried, sugar-coated “Bambalouni” donuts. Stay a night in one of the many charming locally-owned BnBs, wake up early before the tourist rush, and take in the awe-inspiring views in (relative) solitude.

A 19th century Beylic palace in the Tunis district of Le Bardo, the museum of the same name is home to one of the most revered archaeological and historical art collections in North Africa. Across 50 galleries and rooms, the breadth of its offerings encapsulates the unfolding of everyday life across the various civilizations who have called Tunisia home over the past 3,000+ years. Alongside the Bardo’s main attraction – one of the world’s most comprehensive collections of Roman mosaics, the best-known of which depicts the poet Virgil surrounded by muses – there are Punic jewels, Greek bronzes, marble sculptures and furniture rescued from a Roman shipwreck, as well as an embarrassment of countless further riches that make the entry fee of 11 TND ( ~3,40€) an incredible investment.

There’s a youthful vibrancy to the capital of Tunis, and a great base for encountering glimpses into the city’s local creative scene is Dar Ben Gacem, nestled into Rue du Pasha, a historic alleyway in the city’s tightly-wound medina. The Dar (house) was built around the 18th century by a family of perfumiers, whose descendants occupied it for 300 years, until the Ben Gacem family took it over in 2006 and turned it into a seven-room boutique hotel full of local character. Functioning as a social enterprise complete with an artist residency, Dar Ben Gacem is an integral part of Tunis’s cultural community, and its inviting communal spaces – from tranquil tiled courtyards to the vaulted rooftop “majlis” meeting space – ensure there’s plenty of opportunities for memorable encounters and exchange.